ONLINE SALE
Home • Who are we? • Corral

A Little Bit of History

In 1601, Francisco Sánchez, professional carpenter, was asigned by the Town Hall of Alcalá de Henares to build this open-air theatre (corral de comedias) on what it was known as the Market´s Square (Plaza del Mercado).

Since it opened to the public in 1602, the Corral underwent an identical process to other European theaters, which at that period were adapting themselves to modern times with structural reforms according to the performances shown and the customs of the public.

Of its first period as a Corral de Comedias, belong the cobble-work of the patio, the tiers, the aposentos (private boxes for upper class patrons) and the cazuela (upper gallery for women only).

In the 18th Century it was transformed into a neoclasic coliseum, roofed by means of a series of beams, which improved its acoustics, especially for musical events.

In the 19th Century, its Romantic Age, endowed the seating courtyard with its typical horseshoe shape, covered with a ceiling made of plaster that was decorated with paintings.

Eventually, at the beginning of the 20th Century, with cinematographic revolution, a film screen was also installed to turn the theater into a cinema and so it remained until the Seventies.

As it became an unprofitable business, the Corral was abandonned for several decades, until the theater gradually deteriorated and fell into disuse. However, in the Eighties and with institutional financing, began a slow and rigorous process of restoration which continued until 2003, year when the Corral de Comedias reemerged incorporating harmoniously in its architecture the three styles that had defined all of his past history.

Nowadays, this space is a live theater-museum which, hand by hand with the Regional Department for Culture and Sports and the Town Hall of Alcalá de Henares, faces the 21st Century with the hope to keep on incorporating experiences to its four centuries of history.

Since the 10th of January 2005, on behalf of the Regional Department for Culture, the Foundation Teatro de La Abadía has become in charge of the management and programming of the Corral de Comedias de Alcalá de Henares, that opened its doors as a theatrical space with a permanent program the 2nd of April 2005, with the opening concert Musics of the Quixote (Músicas del Quijote) conduced by Jordi Savall and performed by the Capella Reial de Catalunya, with the attendance of the President of the Regional Government, Esperanza Aguirre; the Head of the Regional Department for Culture and Tourism, Santiago Fisas and the Mayor of Alcalá de Henares, Bartolomé González. 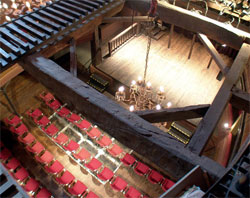 The Corral de Comedias was built in 1601 and opened to the public one year later. Architectural masterpiece from the 17th Century, the former Cobblers Open-air Theater (Corral de Zapateros), is one of the oldest public theaters in the Western World. It stands as a neoclasic coliseum roofed in 1769, one of the first Romantic theaters, with a proscenium stage which is conserved in our country since 1831 and has the special feature of endowing the seating courtyard with its typical horseshoe shape.

As of 1945, the Corral was used as screening room for movie pictures (the popular "movie theatre"), closing down in 1971 in a most definitive way, due to its deteriorated state of abandonment, as it was only used as warehouse by that time.

In 1981, the Madrid Regional Government undertakes a thorough process of restoration and renovation of the theater.

Since 2005 onwards, the Teatro de La Abadía, comissioned by the Madrid City Council is in charge of the management and programming of the Corral de Comedias. This new stage opens the 2nd of April of that very same year, with the concert Musics of the Quixote (Músicas del Quijote) by Jordi Savall. From then on, the Corral develops a continuos and multidisciplinary program of performances and events with the rigourness which distinguishes the established Teatro de La Abadía although considering the prominent features of this extraordinary historical building.